If you are planning your next trip to Kullu then it is better the trip falls during October especially around the auspicious “Vijayadashmi” Day. This is the time when locals as well as tourists gather in Kullu to enjoy the festival of Dussehra that has fervent celebration. You will get to know about this sacred festival of Dussehra from this article. 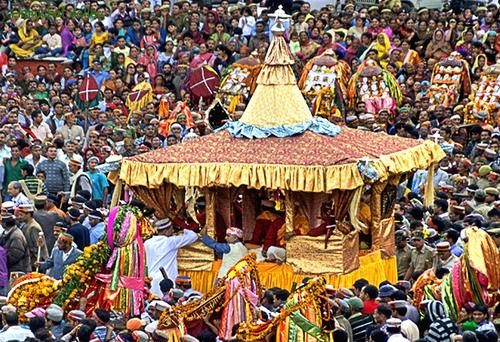 Unless and until one becomes a part of Kullu Dussehra, an internationally famous festival, it is difficult to have the feel of the same. Dussehra Festival is the most enthusiastically and vibrantly celebrated festival of the Kullu valley and. The festival is celebrated in the month of October and celebrations take place for a week. Unlike celebration of Dussehra in all the other parts of India, this celebration starts on the day of “Vijaya Dashmi”, a day that marks the victory of good over the bad. On this day, the demon king was killed by Lord Rama. The celebrations of Dussehra in Kullu have started in 17th century during the reign of Raja Jagat Singh. This one-of-its-kind festival of Kullu gets tourists from all over the globe who get to see and feel the Indian rituals and festivals from very close.

Dussehra Celebration in Kullu started during the rule of Raja Jagat Singh who was the ruler of Kullu during the period 1637-1672. The celebration of Dussehra in Kullu has a story associated with it. Once the kind was informed that a Brahmin, Durga Dutt, living in the nearby village Tipri, have many beautiful pearls with him. The king instructed the courtiers to get the pearls from Durga Dutt. Durga Dutt tried to convince the kind that he does not possess any pearl but king paid no heed to him. 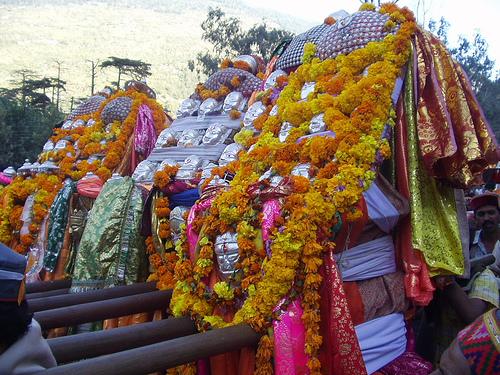 The courtiers harassed the Brahmin too much and it became unbearable for him. When the torture crossed the limit, Brahmin locked all his family members along with him in a room. The entire house was set on fire. All this was done when the king came to the village in order to collect the pearls. Durga Dutt cursed the king in front of the fire and the entire family turned into ashes in front of the king. After few years, the king got seriously ill and he realized that he had done a sin by torturing the family of Durga Dutt and becoming the cause of their death. He could eat food because he got to see worms instead of food.

Every time he wanted to drink something he thought it to be blood.  None of the doctors could do anything to cure the king. He then went to Pahari Baba (Kishan Bairagi) to get rid of this situation. Babaji advised him to take shelter of Lord Rama and seek his blessings. He advised the king to drink charanamrit of Lord Raghunathji and king had sent another sadhak named Damodar Das to get an idol from Ayodhya. 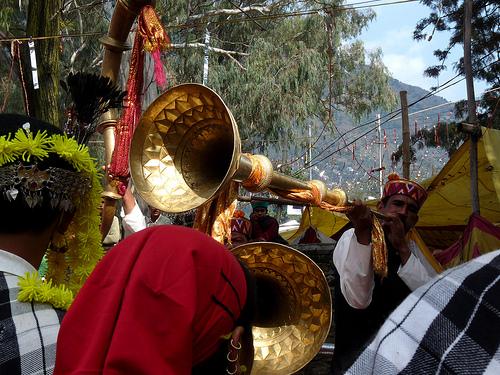 With his magical powers, Damodar Dasji got the idol of Lord Rama from the temple “Tretnath” of Ayodhya in the year 1651 and a temple was built to install this temple in Sultanpur in Kullu. After drinking the charanamrit of Lord Rama, the king got rid of his illness and since then Lord Raghunathji became the main deity of Kullu Valley. Celebration of Dussehra in Kullu was started since then.

Let us read about the rituals of Kullu Dussehra: 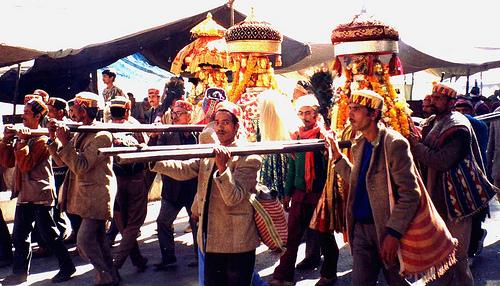 Those idols are placed in decorated palanquins. The ropes of the chariot are pulled by the locals as they consider the act to be a very sacred one

Every morning and evening parades of the Gods and Goddesses are organized. Fairs are arranged. Many stalls are set up in the area where selling of household items, garments, local handicrafts and others are done. Local artists perform dances, songs and plays during the celebration days. 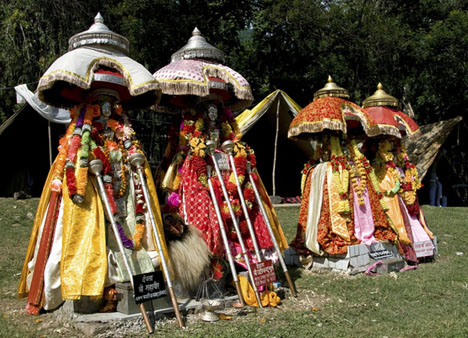 The chariot of Lord Raghunathji is taken near River Beas. On the banks of the river, heap of thorn bushes are put on fire to mark the killing of demon king Ravana by Lord Rama and burning of Lanka. Animals are sacrificed in order to show respect to Lord Raghunathji. After that the chariot is taken back to Sultanpur where the idol is installed back to the temple of Lord Raghunathiji.

During this festival not only religious ceremonies are organized but several fairs are held especially the International Folk and Handicraft fair.