Kullu Valley has many religious spots and that is why thousands of devotees keep coming here throughout the year. Festivals like Dussehra, Shivratri, Navratri etc. are celebrated with great joy. The main deity of Kullu Valley is Lord Raghunath or Lord Rama. Since centuries, various festivals used to get patronized by the royal family of Kullu and Dussehra celebration at Raghunath Temple Kullu is no exception. Here in this article you will get to know about the details of Raghunath Temple located in Kullu Valley. 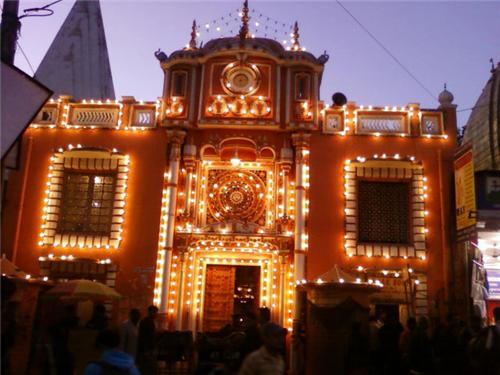 One of the most popular temples of Kullu Valley, Raghunath Temple is situated on magnificent hillock overlooking the entire valley. The idol of Raghunathji installed in this temple is believed to safeguard the entire valley from any kind of evil. The temple is the epitome of faith and devotion of people who keep coming here especially during the grand celebration of Dussehra Festival. The festival is celebrated for 10 days and devotees as well as common tourists from all over the world flock here to be a part of this festival that is an amalgamation of culture and faith of India. The temple was built in the year 1651 by the then king of the Kullu Valley, Raja Jagat Singh. The temple architecture has the blending of Pahari and Pyramid style. The temple is situated at a height of 2050 m above mean sea level. Temple is constructed with white marble. Above the main prayer hall, a “Vimana(aircraft)” is installed. The white pillars of this temple have been beautifully carved.

The history of Raghunath Temple Kullu dates back to 1637 AD during the reign of Raja Jagat Singh, the ruler of Kullu Valley. Raja was given information that a Brahmin named Durga Dutt residing in the nearby village Tipri has a collection of beautiful pearls. Raja wanted to have the pearls but when he asked for it, Durga Dutt told him that he does not have any pearl with him. Raja did not get convinced though Durga Dutt tried to convince him in all possible ways.

Raja gave him the last warning and scared by Raja’s warning Durga Dutt set him whole family and the house on fire. He cursed Raja stating that he would be punished for his cruelty. In later years, Raja had leprosy and he felt guilty of killing the brahmin’s family. He then took shelter of Fuhri Baba otherwise known as Kissan Das Ji. Baba advised the king to bring the idol of Lord Rama from Tretnath Temple, Ayodhyaya. As per Baba’s instruction, the idol of Trethnath Temple was stolen by Damodar Dass and brought to Kullu in the year 1651 AD. 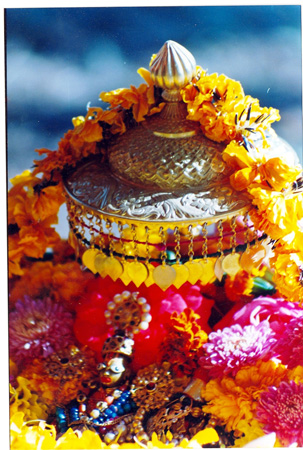 The idol was installed in the temple built for Raghunathji and Raja Jagat Singh drank Charanamrit for many days to get rid of the curse and get cured of his disease. Since then he offered his life and the entire kingdom at the feet of Raghunathji and Dussehra celebration is organized every year since 1651. Every year, during the first fortnight of Ashwin month, 365 Gods and Goddesses residing in the valley get invitation from the king to come to Dhalpur and organize a yagna to honor Raghunathji.

Dussehra Festival in Kullu is celebrated unlike it is done in other parts of India. In most parts of India, effigies of demon King Ravana, his son Meghnath and Ravana’s younger brother Kumbhakarna are burnt. In Kully Valley the celebration of Dussehra festival starts the day it ends in rest of the country. It starts on the day of Vijayadashmi, the day when Lord Rama defeated Ravanas. Fairs are held on this occasion and during this time International Folk Festival is organized. Numerous stalls are set up selling local items including housewares as well as woolen garments, wooden handicrafts and traditional jewelry items of the region. 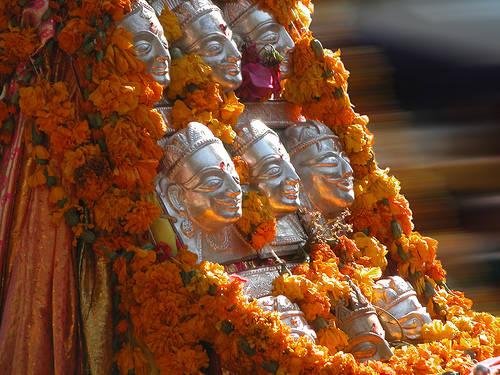 On the 1st day of Dussehra Celebration Devi Hadima, the main deity of the royal family is brought from Manali. She is welcomed by the royal sick and is escorted to the palace. After she ushers her blessings to the royal family, she is brought to Dhalpur. After the idol of Raghunathji is saddled around the idol of Hadima Devi, he is placed on a beautifully decorated chariot. 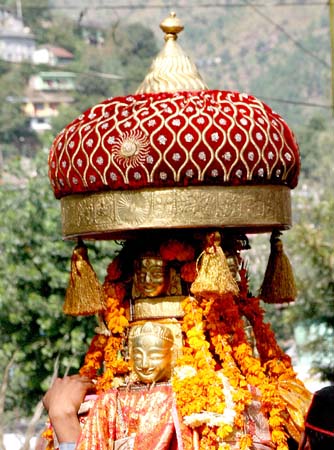 After getting signal from Devi Bhekhti, the ropes of the chariot are pulled. The chariot is taken to another place where Raghunathji stays for next 6 days. Colorful palanquins carry hundreds of Gods and Goddesses during the procession. On the 6th day, “Mohalla” is held which is the gathering of Gods and Goddesses. On the last day of the festival, the chariot carrying Raghunathji is brought to the shores of River Beas and a bundle of thorn bushes is put on fire. The burning of thorn buses symbolizes burning of Lanka. Then Raghunathji is brought back to the temple and the festival comes to an end.

How to Reach Raghunath Temple Kullu

The temple is located in Sultanpur, Kullu which is quite near to the Kullu Town. Kullu Town has regular bus services connecting Kullu to other important cities like Shimla, Chandigarh, Delhi, Ambala, Amritsar etc. The nearest railway station is Jogindernagar Railway Station which is about 100-110 km from Kullu. Buses and taxis can be taken to travel from the railway station to Kullu and then to the Raghunath Temple. If anyone wishes to take airways then the nearest airport is the Bhuntar Airport only 10 km from Kullu Town. The best time to visit the temple is from May to October. The temple remains opened from 5 AM - 9PM.